What the hell is Pét-Nat Sparkling Wine?

So you’ve heard of it. But what the hell is it? Pét-Nat is short for petillant naturel (aka “naturally bubbling”) and is a sparkling wine made according to the traditional ancestral method. Pét-Nats are bottled while the wine is still fermenting, which results in trapped CO2, creating bubbles. This process requires minimal intervention from the winemaker and, like most wine made naturally, it typically ranges from 10-12% ABV (alcohol by volume). Thanks to their natural yeast, Pét-Nats are exciting and produce funky aromas and characteristics unlike any other style of wine. The traditional method produces the bubbliest of sparkling wines at a whoppin' 5-6 atmospheres of pressure. The result is a rustic and lively wine true to its roots. 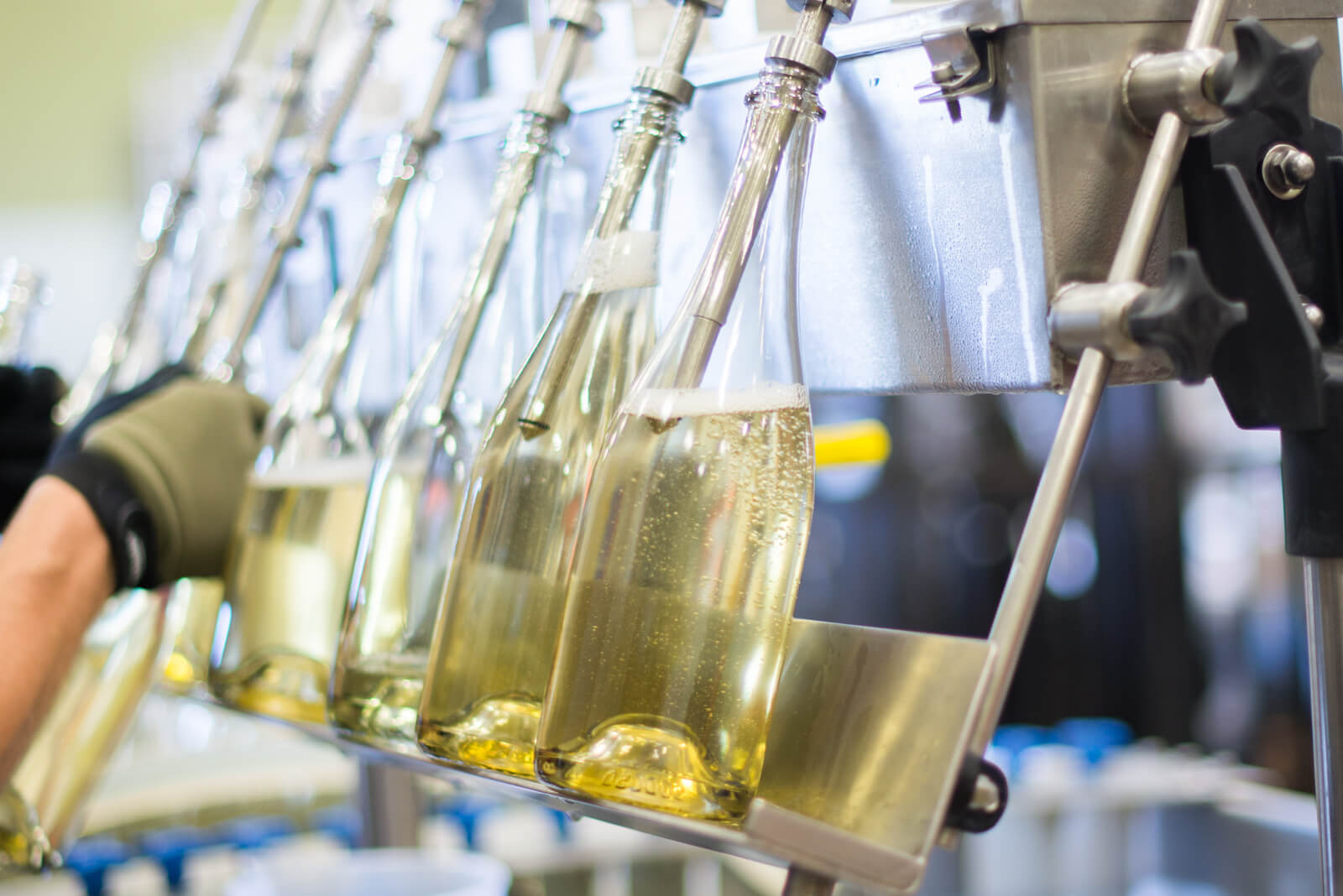 Despite seeming like the latest and greatest, Pét-Nat was first developed in the 16th century (pre-Champagne) and is the oldest way of making sparkling wine. In the 1500s a monk in Saint-Hilaire, France, noticed that his bottled and sealed wine had formed bubbles. The wine most likely had stopped fermenting in cold winter temperatures, been bottled, and started fermenting again when the weather warmed in the spring. Therefore Pét-Nat was born. In the early 1990s, Christian Chaussard, who then had an estate in Vouvray, found that one of his wines with some residual sugar had begun re-fermenting inside the bottle. After tasting this delightfully accidental fizzy wine, Chaussard researched the méthode ancestrale and began experimenting with the process. In the 1990s, Loire Valley winemakers all began experimenting with Pét-Nat as well, following in Chaussard's steps.

What’s the difference between Pét-Nat and Champagne-style Sparkling Wines?

Traditional Champagne and other sparkling wines are the product of combining one or more still, dry wines. These finished wines are bottled and aged and CO2 is created during a second fermentation in the bottle, unlike Pét-Nats, which do not undergo a second fermentation. While it’s true that the ancestral method predates the Champagne method, Pét-Nat only shot up in the last decade. The Pét-Nat method isn’t limited geographically like Champagne but is most commonly found in the Loire Valley and Limoux in France as well as Italy. Traditionally Pét Nats are cloudy, unfiltered, and capped with a crown cap (like beer), compared to the mass-produced products from larger Champagne and Prosecco houses that use characteristically large corks. Classic Champagne may require several years of aging, Pét-Nats are often released and meant to be consumed young. This also isn’t a high roller situation like Champagne; You can easily find a bottle of Pét-Nat for a reasonable $20-$40 compared to their more expensive sparkling counterparts.

All the cool kids are drinking Pet-Nats.

Back in 2017, we released our very first Pét-Nat called California Love. Shout out to Deutschland for the amazing grapes that made this sparkling wine possible. For the core of this blend, we chose Lake County Riesling (65%) for its acidity and perfumed aromas. As a compliment, we added this rad Mendocino Gewürztraminer (33%) and Pinot Gris (2%) that Bertus found us for some pop and flavor. We used several old-school techniques to make this wine and decided not to filter it, because we know you like it a little dirty. In the end, we got a sparkling wine with amazing texture and notes of honeydew melon, honey blossom and jasmine with some nuttiness from the lees contact. The finish is crisp, dry and unforgettable. We love California and it has given all of us so much. This past year has been trying and difficult for this beautiful state, so we dedicated this project to California and make a wine so full of love that it can only be described as “right on.” 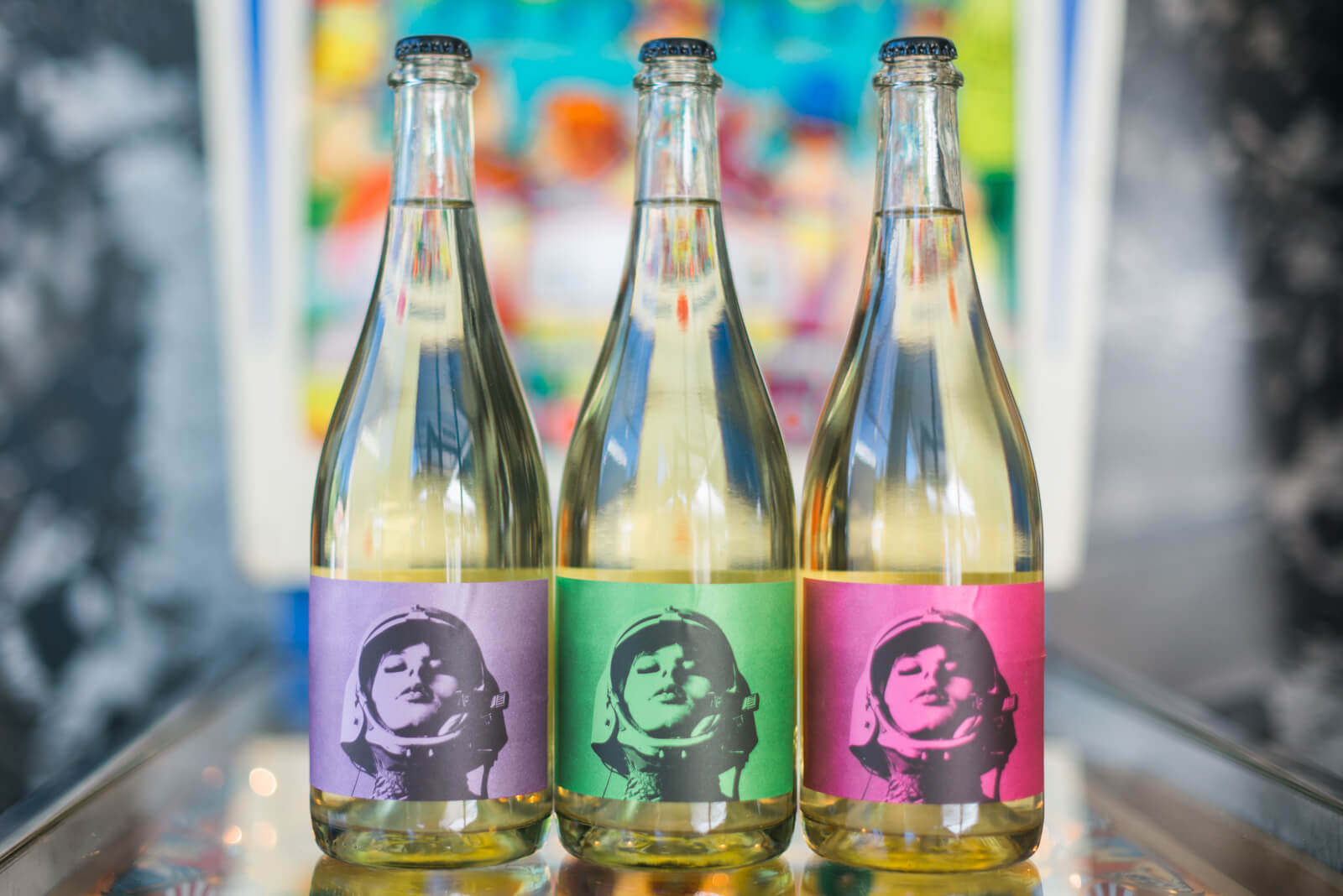 The first two times we attempted to make a Pét-Nat, things didn't go as planned. Two years of learning and refinement later, we finally perfected the craft and the result is Space Crush. Our friends from Babcock Ranch in Solano County hooked us up with a few small lots of their celestial Riesling. After some manual foot-stomping and a run through the basket press, the fermentation process began. After a few weeks, we moved the juice to bottles where the fermentation continued. How'd it turn out? OH MY GOD. We nailed this one. It's fresh, crisp and complex with a floral perfume and green apple, peachy notes that endlessly orbit around your mouth. The texture is fascinating, the bubbles so satisfying and the finish extends to the moon. Space Crush is a natural wine and was not fully filtered. Because of this, there will be sediment inside each bottle from the Pét-Nat process that tells you it is legit. It's dirty, embrace it.

In 2019, we released the wildly popular Pop-Nat. We picked the grapes from Rubidoux Ridge Vineyard, a family-owned property located at 2000-2100 ft. in the rolling hills of the Fiddletown AVA in Amador County. Though this particular vineyard isn’t that old, the area’s grape-growing history can be traced back to the mid-1800s when the population swelled with European settlers chasing the gold rush dream. Honoring the old-school vibe of the area, we decided to pay homage to the vintage popsicle of yesteryear. The label for this fun summer wine replicates popsicle wrappers from the 1960s and 1970s. Just like that cool popsicle on a hot summer day, this wine is refreshing AF on a hot summer day. Tart raspberries and strawberries hit your palate on the first sip, with tiny bubbles that dance across your palate and make way for a wave of crisp acidity. 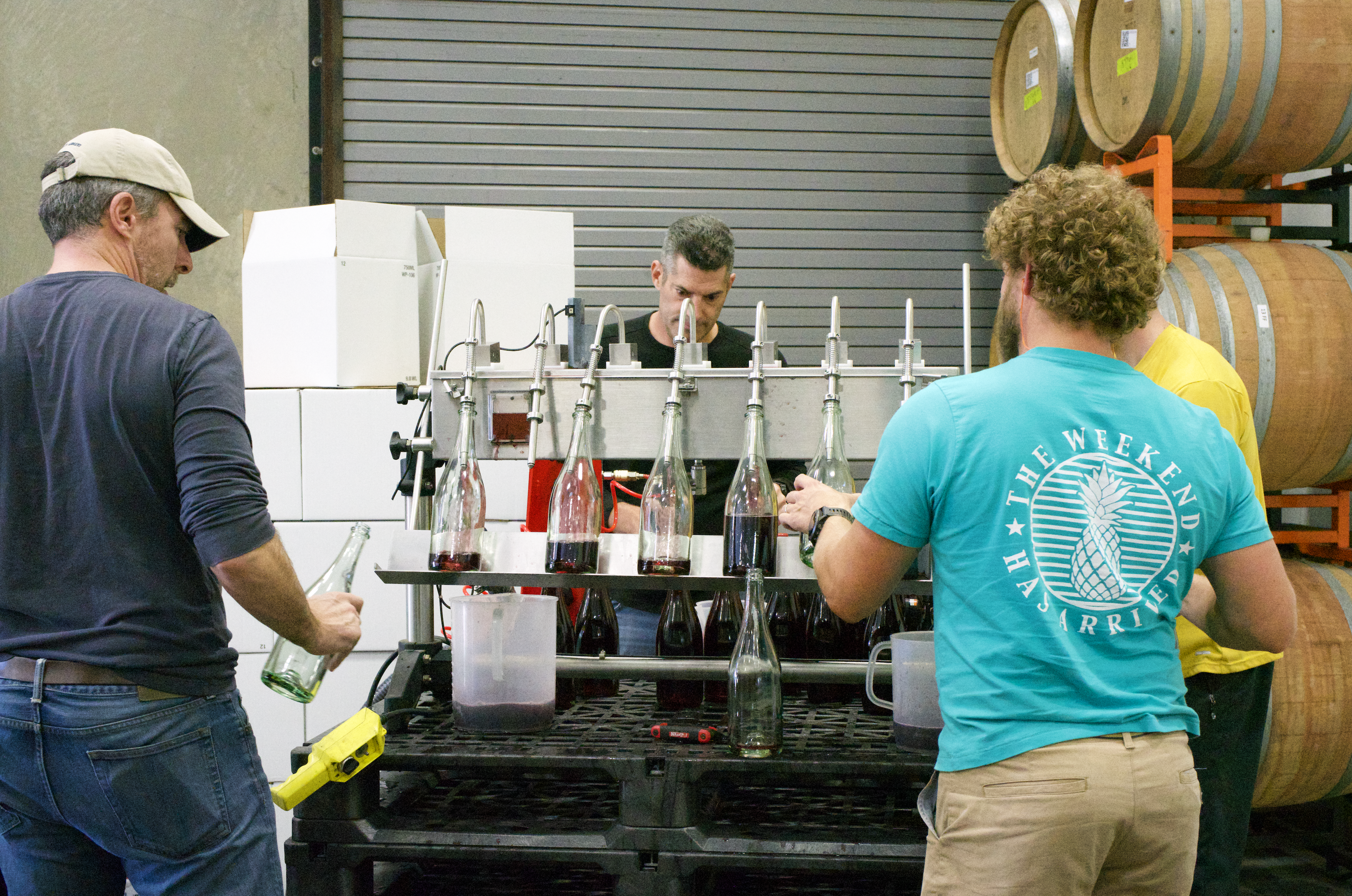 Lastly (but not really…), we released Come, Saints and Sinners. Come, Saints and Sinners is a Carbonic Macerated 100% Petite Sirah Pétillant Naturel sparkling wine made from the legendary Rorick Heritage Vineyard in Calaveras County, California. When we first started checking on this wine, we knew we had a unicorn on our hands. It's like Pop-Nat made out with a Cherry Otter Pop while Love Now More Than Ever watched. Come, Saints and Sinners is ungodly special. Big cherry and juicy strawberry fizzes with brisk minerality, and hints of nectarine and citrus. Our resident Somm, Aaron, compares it to an Italian Lambrusco made in a frizzante style. It's interesting, but not too weird. Complex, but so damn drinkable. Honest to god, this is one of the coolest wines ever produced by Tank Garage Winery.

Hey there! Welcome to Tank Garage Winery, the coolest winery in Napa Valley. No... really. Visiting the tasting room is like taking a trip back in time to a 1920s gas station turned speakeasy, pouring rad as shit wines and playing bomb as hell music. Cool California vibes mixed with vintage decor bring to fruition the most quirky encounter you’ll get at a winery. Every day, we celebrate this crazy dream turned into a movement where we get to do cool shit and you get to come along for the ride. We celebrate the adventurers, the dreamers, the weirdos, the free spirits, and the misfits. So next time you’re in town, you won’t want to miss out. Come by our little garage and celebrate with us.