Getting Closure with Wine Closures

A bottle of wine is representative of the winery and the folks behind its creation; it is the product of viticulture, winemaking, and marketing. This makes the choice between wine closures so critical. Wine closures are a term used in the wine industry to refer to the object used to seal the bottle and avoid unfavorable contact between the wine and oxygen. There are endless options made from both natural and synthetic material. Corks are the most traditional and common type of closure and they come in the form of natural corks, plastic corks, and technical corks. The closure can tell a great deal about the wine it encompasses in regards to longevity, quality, and tradition. The best way to choose your wine closure is to determine how much time you expect the wine to live in the bottle before opening.

The OG cork dates back to the 17th century when glass bottles replaced clay amphorae and wooden barrels. Cork is typically the preferred method for consumers. Corks are 90% natural cork and 10% natural glue mixed with cork granules. This combination provides strong, high-quality corks with elasticity that hold the cork in place. These are the best corks to use if you are looking for a strong sealer that can be stored for a long time. Keep in mind that corks can be fairly expensive to make and when using them, there is always a risk of cork taint. Using alternatives can be cheaper, avoid the risk of cork taint, and can be more practical. Once fitted with a cork, bottles should be stored on their side or upside down. This will keep the cork from drying out and losing its seal. Once it’s bottled, make sure to store the wine on its side. 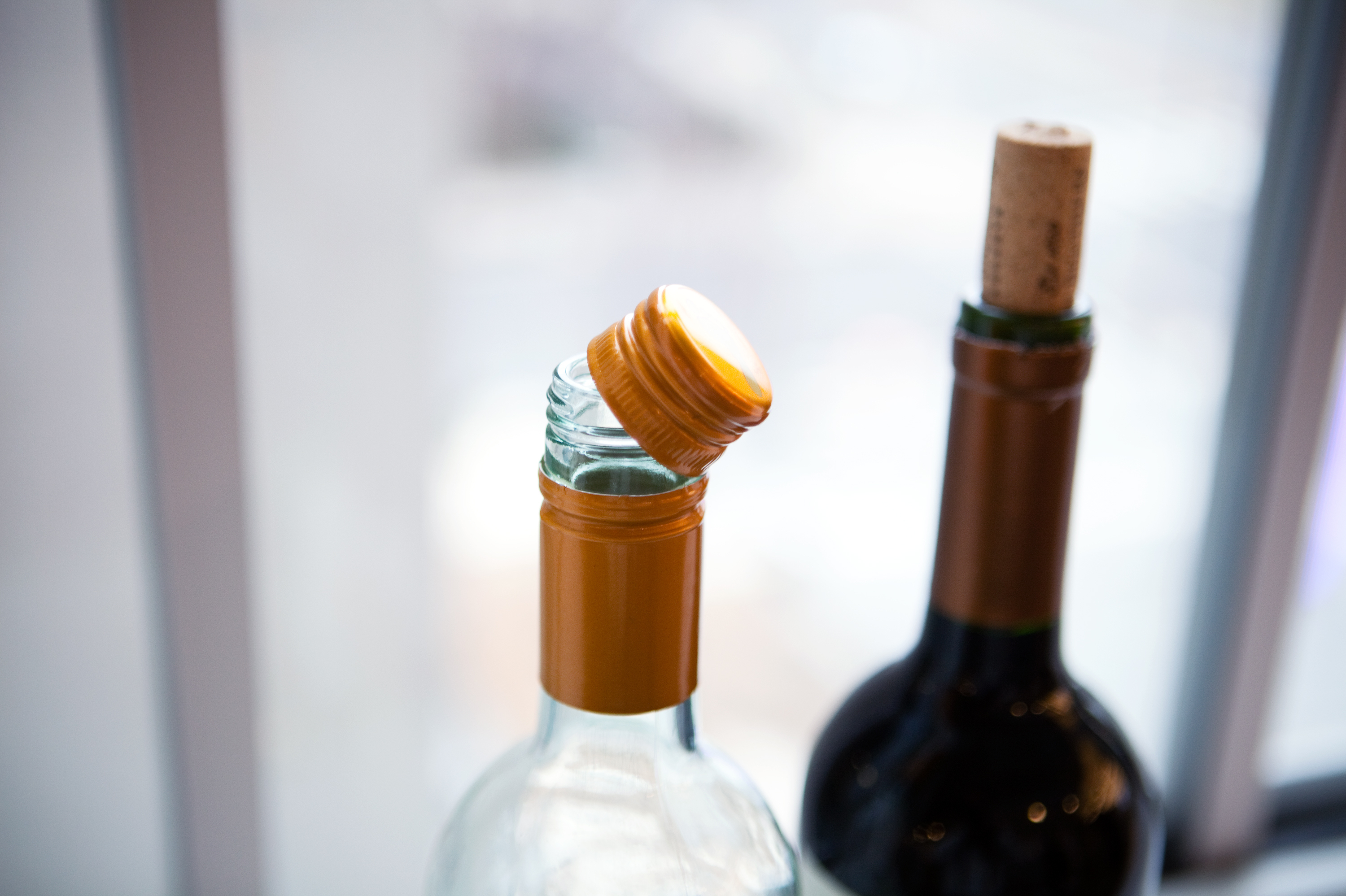 Screwing Around with Screw Caps

Many Americans believe screw-caps are indicative of low-quality wine but that couldn’t be further from the truth. Screw-caps are made from aluminum materials that thread onto the bottleneck. There are actually two parts: the metal cap and the liner inside the top of the cap that seals to the bottle lip. The liner is the important piece controlling how much oxygen can get into the wine. Screw-caps are used predominantly in Austria, Australia, and New Zealand. Many of these producers believe that screw caps are the solution to cork taint, benefit aging, and preserve the aromatics. Screw caps have only been around since the ‘60s but have become increasingly popular as an alternative wine closure. According to Wine Spectator, “A 10-year study done by the Australian Wine Research Institute indicated that wine retaining the most freshness over time had screw cap closures.” Interesting stuff, right?

A muselet is the wire cage that fits over a bottle of champagne, sparkling wine, cider, or beer to prevent the cork from emerging under the pressure of its carbonated contents. The name is derived from the French museler, or to muzzle. The wire cage secures the cork in the bottle, keeping it sealed until it is ready for consumption. Muselets traditionally require six half-turns counter-clockwise to open. Legend has it that Dom Perignon first had the idea to replace the original Champagne stoppers which were wooden bungs wrapped in oil-soaked hemp then sealed with wax and a cork stopper. Muselets are now machine-made in the millions, varying in size, color, and design. Many folks even like collecting their muselets, as different manufacturers will feature their emblems. 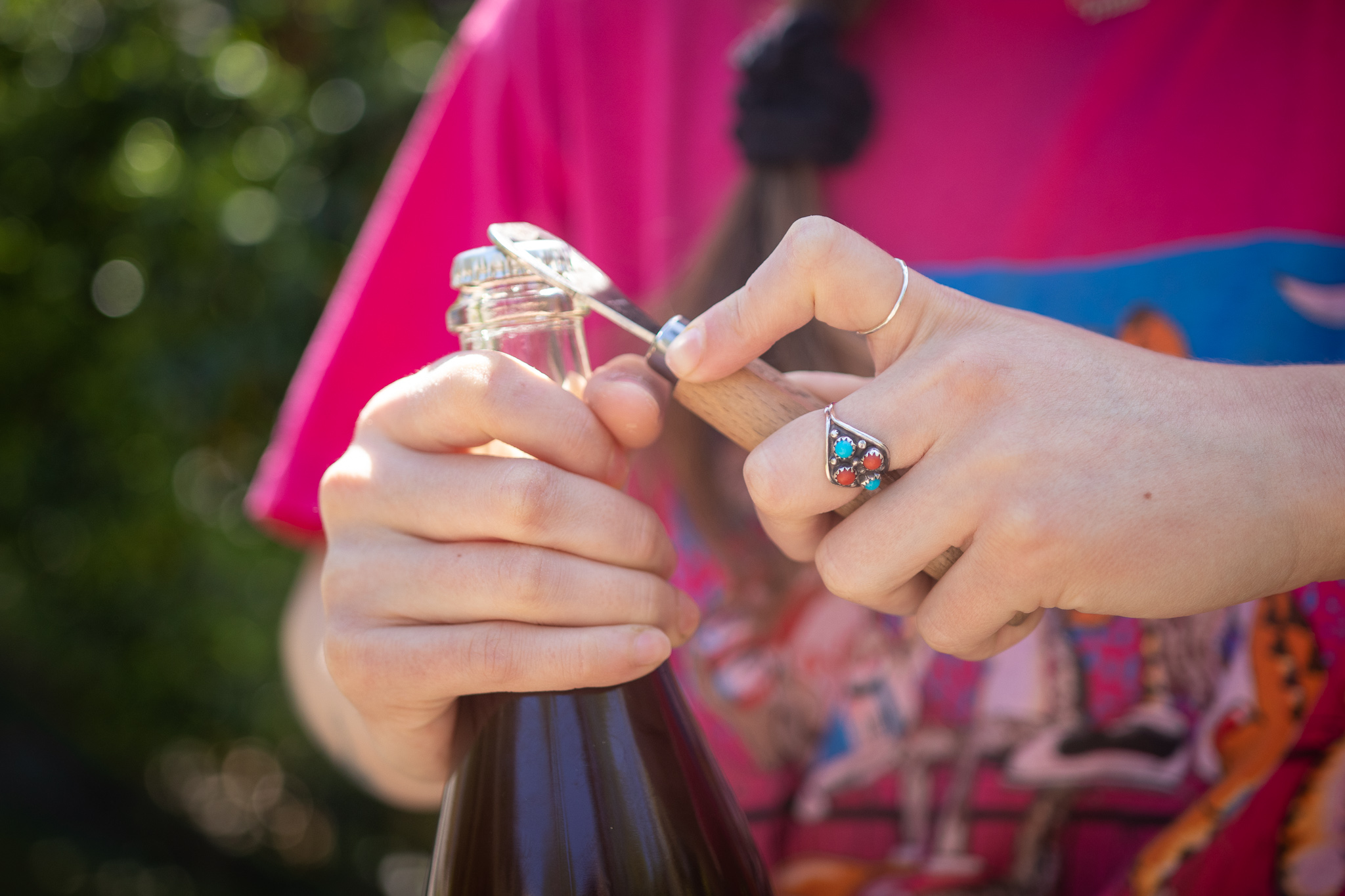 Crown caps (aka crown seal, crown cap, or just cap) were the first form of a crimped bottle cap, invented by Charles Robert Spencer. Spencer was a machinist that sold the patent to another company that quickly began mass-producing the product. The crown cap was the first highly successful disposable product that allowed soda bottles to be stored upright. Bottles that can accommodate crown caps can usually handle a bit of pressure. You don’t typically see a lot of wine sealed with a crown cap but it is becoming increasingly popular. At Tank, we’ve used crown caps on all of our Pet-nat sparkling wines. Not only do they look cool, but they also seal the vessel that undergoes a secondary fermentation inside the bottle.