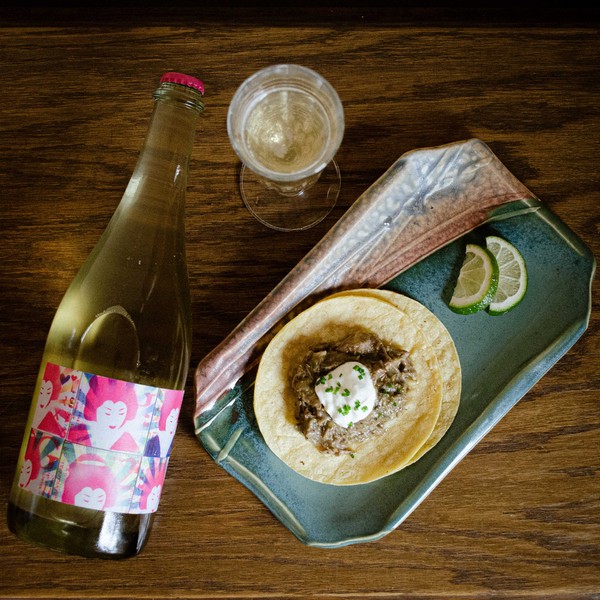 Did someone say tacos?

Not going to lie, there are very few things in life that we love more than good ol' tacos.

Take your dinner to the next level with this Chile Verde recipe and a bottle of Super Geisha, our latest Pét-Nat and current obsession.

We promise you won't regret it.

Dice onion, Serrano and Jalapeño peppers and transfer to a bowl. Mince garlic and set aside.

Heat oil in a large skillet over medium heat. Add onion and chopped peppers to the pan, season with salt & pepper and sweat until soft and onions are slightly translucent. Add minced garlic and cook until fragrant (do not brown). Add Cumin, Oregano and Corriander and stir until fragrant. Remove from heat and set aside.

In a bowl, coat cubed pork with oil and season generously with salt & pepper. Allow pork to marinate for ~5 minutes. Using a dutch oven or heavy-bottomed pot, sear pork over medium-high heat in small batches until browned on all four sides. Deglaze with chicken stock in between batches, adding the deglazing liquid to cooked pork mixture. Wipe pan between uses and add fresh oil to sear the next batch. Once all the pork has been seared, combine with onion, pepper and garlic mixture.
Tip: Don't overcrowd your pan with pork – if cubes are placed too close together, you will not achieve a sear on your meat. The browning process is what helps creates the rich flavor in this dish, so take your time!

Meanwhile, remove and discard papery skins from tomatillos. Place tomatillos on a sheet pan with the whole Anaheim/Hatch chiles (if using canned chiles, only the tomatillos need to go in the oven). Drizzle with olive oil and place pan in oven to cook for approximately 10-20 minutes, or until the peppers are slightly blistered/charred and tomatillos have softened.

After removing sheet pans from the oven, place peppers into a ziplock bag for 5 minutes. This allows the skins to soften. After 5 minutes in the bag, remove skins and seeds from peppers and place them in a food processor or blender with tomatillos and puree until smooth.
Tip: Skins can be easily removed by wiping the peppers with a paper towel or gently scraping with a knife.

Add tomatillo and pepper puree to the pork mixture and simmer over low heat for approximately 2-3 hours, or until pork is fork-tender.

Serve with corn tortillas and your favorite accoutrements.